Rising concern for the health benefits and safety of food is accelerating a shift toward using natural, rather than synthetic, colorings in the food products industry. Having recognized the potential of Spirulina early on, in 1977 DIC became the first in the world to develop commercially viable technologies for managed Spirulina cultivation. DIC also launched phycocyanin, a vivid blue colorant extracted from Spirulina, as Linablue®, a natural blue food coloring. In the years since, DIC has become the leading global supplier of natural blue food coloring, which it supplies for use in confectionery and desserts, among others. 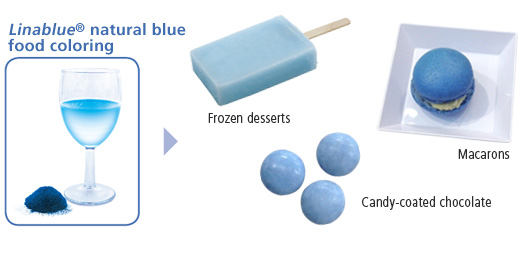 Many countries and regions have established independent regulations governing the use of synthetic food coloring. Consumer awareness of the potential health hazards of artificial food colorings has long been high in Japan. As such, major food stores have responded to consumer sentiment by setting forth strategies for shifting their focus to products made with natural food colorings. The situation is similar in most developed economies.

It was against this backdrop that in September 2013 Spirulina became the first natural blue food coloring to be approved by the U.S. Food and Drug Administration, while in November 2013 the European Commission presented natural color guidelines that authorized sales of Linablue®, achievements that served to reconfirm the product’s reputation for outstanding safety. Looking ahead, DIC expects demand for Linablue®, already strong in Japan, the Republic of Korea (ROK) and the People’s Republic of China (PRC), to expand in Europe, North America and Southeast Asia.

The DIC Group currently conducts integrated production of Linablue® at its Spirulina farm in the PRC. In response to soaring demand, DIC is currently building a new Linablue® plant at its Spirulina farm in the U.S. state of California, operations at which are expected to commence in approximately one year. To ensure premium-quality products, it is vital to manage quality at all stages of the production process, from the cultivation of high-grade algae on strictly managed farms to the processing of the algae into powder. Quality thus remains a core focus in all processes, from phycocyanin extraction to refining and concentration, color modification and sterilization. This strong commitment to safety and quality underscores the market dominance of Linablue®. It is also worth noting that algae absorbs carbon dioxide and produces oxygen as it grows, for every 800 tons of Spirulina cultivated 1,200 metric tons of carbon dioxide are absorbed. Spirulina cultivation uses a significant volume of water. At its Spirulina farm in the United States, all water used in cultivation is recycled and reused, meaning that absolutely no wastewater is discharged outside the facility. At its farm in the PRC, DIC has installed an advanced wastewater treatment facility, facilitating stringent management of water quality. 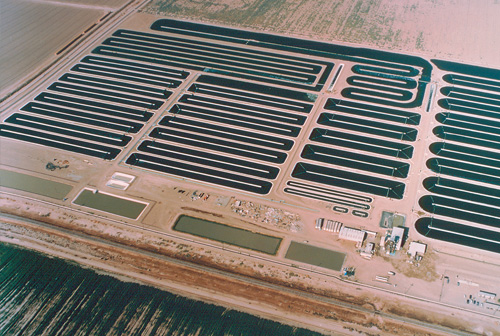 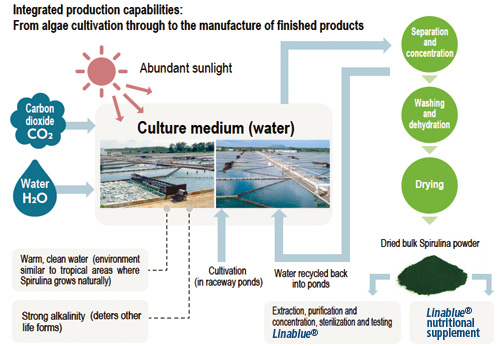 Integrated production capabilities: From algae cultivation through to the manufacture of finished products

VOICES from the DIC Group

In the future, we will also extract and commercialize colorants other than blue from Spirulina.

In addition to a blue colorant (from phycocyanin), Spirulina is a source of a green colorant (from chlorophyll) and an orange colorant (from carotenoids), as well as of a number of useful active ingredients. We are currently working toward the commercialization of products based on these other Spirulina-derived colorants, which will enable us to expand our supply of safe, attractive products to people worldwide. While Linablue® is currently our only Spirulina-derived natural food coloring, we will continue building on the solid reputation this product enjoys in North America and Europe, as well as on the DIC Group’s superior technological capabilities, to commercialize products based on other Spirulina-derived colorants.

Our goal is to increase awareness of the value of Linablue® and Spirulina worldwide.

The safety, quality and vivid color of Linablue® is known to people in the food products industry, although this is something of which consumers are not necessarily aware. Spirulina is also currently being used in a project that aims to improve nutrition and alleviate hunger among children in the Republic of Zambia, where it has proven highly effective. Another application is as an additive to feed for ornamental carp that helps to bolster immunity to disease and enhance color. In Japan, ornamental carp raised on a diet that includes Spirulina have taken top honors in national competitions. By expanding uses and adding to Spirulina’s record of excellence, we are seeking to promote awareness of its value among people around the world.

Seeking to extend the lives of solar cell modules

The Sun Chemical Group, a core member of the DIC Group with operations in North America and Europe, recently revamped its website, improving search capability and simplifying navigation.