The DIC Group works to grasp the impact of its operating activities on biodiversity and to use land and natural capital in a sustainable manner.

The DIC Group recognizes the preservation of biodiversity as a critical challenge. As part of DIC Management School, the Group’s training module for senior management in Japan, in January 2011 a lecture was given by an outside expert on the relationship between corporate activities and biodiversity. The lecture was attended by 85 executives from corporate headquarters, as well as from plants and Group companies across the country, and prompted the launch of a wide range of related initiatives. For example, the same year brought the launch of an initiative designed to ensure an effective grasp of the relationship between the Group’s operating activities and biodiversity at all stages of its products’ life cycles, from R&D and the procurement of raw materials through to end-of-life disposal or recycling. In April 2011, experts from the Chiba Biodiversity Center, a prefectural government organization, observed the 30-hectare natural forest and gardens in Sakura, Chiba Prefecture, occupied by the Central Research Laboratories and the Kawamura Memorial DIC Museum of Art, giving DIC’s biodiversity management efforts high marks and offering advice for future initiatives.
From the beginning, DIC has used a closed system for circulating and reusing groundwater for the Central Research Laboratories and hired a waste processing firm to ensure no wastewater escaped from the site. The site’s satoyama landscape makes it an ideal home for 200 tree and 500 flower varieties, as well as for an abundance of other wildlife, including birds and insects. Loved by the local community, the site has welcomed approximately 200,000 visitors annually since the opening of the Kawamura Memorial DIC Museum of Art in 1990. 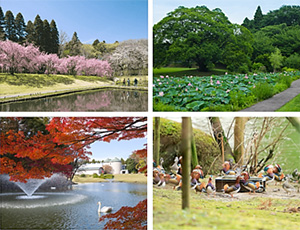 The forest and gardens of the site occupied by the Central Research Laboratories and Kawamura Memorial DIC Museum of Art is always alive with seasonal flowers and foliage.

Establishment of a Biodiversity Satellite

The lush greenery of the Central Research Laboratories boasts a diverse range of naturally growing trees, including cedar, sawtooth oak and Japanese chinquapin. To preserve the natural environment, visitors to the site are prohibited from collecting plants and wildlife and are instead encouraged to enjoy the pristine natural scenery as is. In cooperation with the Chiba Biodiversity Center, the Kawamura Memorial DIC Museum of Art established a biodiversity satellite, a special display area in a small rest cabin on the site. Designed with the aim of fostering greater understanding of the importance of biodiversity, the satellite features permanent exhibits, including information panels and other materials related to biodiversity prepared by the organization, as well as introduces rare species native to Chiba and provides information on prefectural biodiversity initiatives. The DIC Group views parks and forests that preserve rich ecologies to be precious assets for local communities and society. Continuing to share with many people the joy of experiencing that beauty and richness requires meticulous management. We feel passing these joys on to future generations are our mission.