Reduce VOC emissions into the air.

The DIC Group works to grasp the environmental impact of its operating activities and promotes systematic measures to reduce its environmental footprint. The Group also advances efforts aimed at preventing environmental pollution.

Since chemicals companies handle a considerably greater volume and more diverse range of chemical substances than companies in other industries, they must be extremely vigilant to prevent discharges of substances into the environment. Against this backdrop, the DIC Group strives to ensure a grasp of the environmental impact of its operations and promotes systematic efforts to prevent environmental pollution. DIC has worked since fiscal year 2000 to reduce emissions into the air, water and soil of substances designated under pertinent laws and regulations in Japan—including the Act on Confirmation, etc. of Release Amounts of Specific Chemical Substances in the Environment and Promotion of Improvements to the Management Thereof, the Soil Contamination Countermeasures Act, the Pollutant Release and Transfer Register (PRTR) Law, the Ozone Layer Protection Law, the Act on Rational Use and Proper Management of Fluorocarbons and the Law Concerning Special Measures for Promotion of Proper Treatment of PCB Wastes—and of substances targeted under a voluntary scheme created by the JCIA.* Other DIC Group companies in Japan have done the same since fiscal year 2005.

The chair of the Sustainability Committee (president and CEO), oversees the planning and promotion of environmental conservation initiatives by the Responsible Care Department and production and R&D site Safety and Environment groups. To ensure compliance with pertinent laws and regulations, the Responsible Care Department monitors legal and regulatory trends worldwide to ensure sites are able to comply promptly and effectively.

Having succeeded in achieving a voluntary target—set in fiscal year 2007—for reducing emissions of VOCs into the air of 30% from the fiscal year 2000 level by fiscal year 2010, DIC Group companies in Japan continue to pursue steady annual reduction through facility improvements and emissions management.
In fiscal year 2020, DIC reported emissions of VOCs of 162 tonnes, a 56% decrease from fiscal year 2019. Factors behind this result included the absence of an accident involving a warehouse fire at the Saitama Plant, which had caused a sharp increase in emissions in the previous period, and a decrease in production activities owing to COVID-19. As a consequence, total emissions of VOCs by the DIC Group in Japan amounted to 327 tonnes, down 40% from fiscal year 2019. Overseas, Group companies in Greater China and the Asia–Pacific region continued to promote efforts to reduce emissions. In the PRC, in particular, the Group is updating equipment and stepping up emissions management practices in response to the tightening of pertinent local regulations.

In fiscal year 2020, the DIC Group in Japan monitored discharges of 462 class-1 chemical substances designated by the country’s PRTR and 89 PRTRdesignated chemical substances (other than class 1) and one substance group (chain hydrocarbons with up to 4–8 carbon atoms) targeted for study by the JCIA. During the period, DIC and the DIC Group in Japan used and/or produced 112 and 130 of these substances, respectively, in units exceeding 1.0 tonne.

Taking fiscal year 1990 as the base year, DIC Group companies in Japan have worked to reduce sulfur oxide (SOx) and nitrogen oxide (NOx) emissions—key causes of acid rain—from boilers. The Group has also worked to reduce chemical oxygen demand (COD), an indicator of the quality of wastewater. In fiscal year 2020, DIC’s emissions of SOx and NOx increased, with the former doubling, to 4 tonnes, and the latter rising 8%, to 155 tonnes. As a consequence, emissions of SOx and NOx by the DIC Group in Japan were 12 tonnes, up 52%, and 182 tonnes, level with fiscal year 2019, respectively. DIC’s COD decreased 18%, to 570 tonnes, while that of the DIC Group in Japan fell 15%, to 723 tonnes, as COVID-19 pushed down production volume. The Group will continue taking steps to reduce COD by enhancing water quality management.
Overseas, DIC Group companies are switching from diesel to natural gas, and from diesel- and heavy oil–fired boilers to biomass boilers at sites with appropriate infrastructure. To reduce COD, the Group is promoting the reuse of water and the installment of environment-friendly closedloop recycling and wastewater treatment systems that purify wastewater to a level that exceeds that mandated by law.

In Japan, the DIC Group monitors emissions of dioxins from waste incinerators that produce these byproducts, a group of compounds with varying toxicities. At present, the Group has six such facilities. Continuous efforts to reduce emissions levels have enabled the Group to achieve results that greatly surpass standards specified in the Act on Special Measures Against Dioxins.

04Ensuring the Appropriate Collection and Storage of PCBs

The DIC Group in Japan continues working to ensure the appropriate collection, storage and management of equipment containing polychlorinated biphenyls (PCBs), including older-model transformers, capacitors and stabilizers, in accordance with the Law Concerning Special Measures for Promotion of Proper Treatment of PCB Wastes (Law No. 65 of 2001). The Group also ensures that PCBs are disposed of in accordance with the practices of the Japan Environmental Storage & Safety Corporation (JESCO).

The DIC Group in Japan takes care to respond to potential risks associated with asbestos during demolition or when retrofitting equipment as outlined in the Ordinance on the Prevention of Health Impairment due to Asbestos (Ministry of Health, Labour and Welfare Ordinance No. 21 of 2005).

In recent years, waste plastic and marine plastics, a result of the improper disposal of end-of-life plastic containers and other products, have become issues of major concern worldwide. In Japan, the DIC Group works to prevent pollution of the environment, particularly through measures to preclude leaks of raw materials from production facilities and the recycling of plastic waste generated in production processes. In fiscal year 2020, 46% of waste plastic generated by the Group was recycled. Approximately 92% of this was reused, including in the recovery of energy from fuel utilization.
The building of a circular economy is not something that can be achieved by any one company. Accordingly, key initiatives are being promoted by industrial and public–private partnerships around the world. In Japan, DIC is a member of the Japan Initiative for Marine Environment (JaIME), formed by five chemicals industry organizations, and the Japan Clean Ocean Material Alliance (CLOMA), a Ministry of Economy, Trade and Industry–led alliance of companies in the plastic products supply chain. Overseas, Sun Chemical participates in A Circular Economy for Flexible Packaging (CEFLEX), a consortium working to make flexible packaging in Europe circular, ensuring its ability to access and share the most up-to-date information across the DIC Group. The Company has also organized projects involving various departments concerned with the circular economy to promote the collection of plastics, as well as the shift to alternative and/or biodegradable materials.

In fiscal year 2018, PT DIC Astra Chemicals won an award from the Special Capital Region of Jakarta (Daerah Khusus Ibokota Jakarta (DKI Jakarta) in Indonesian) under the DKI–Jakarta–Company Environment Performance Appraisal Program. High marks were given to the company’s efforts to comply with Indonesia’s environmental management laws and related regulations, as well as the excellence of its systems for managing treating industrial effluents and air pollution. These awards are conferred on companies demonstrating excellence in the area of environmental protection based on the results of environmental performance audits of all companies in the special capital region, which are conducted by the Jakarta government. PT DIC ASTRA Chemicals was one of only eight award winners chosen from among more than 1,000 Jakarta-based manufacturers.

DIC’s Kashima Plant is promoting efforts to increase its wastewater treatment capacity and conserve energy. With the aim of enlarging its wastewater treatment facilities, DIC’s Kashima Plant recently installed a BIOIMPACT® expanded granular sludge blanket (ESGB) anaerobic wastewater treatment system. This system is manufactured by Sumitomo Heavy Industries Environment Co., Ltd. Conventional chemical wastewater treatment systems are aerobic, i.e., require oxygen. In aerobic wastewater treatment systems, activated sludge* is used to break down organic matter in wastewater into CO₂ and water. In contrast, the BIOIMPACT® system uses ESGB, a newly commercialized anaerobic process whereby wastewater is flowed into a tank containing a dense blanket of sludge granules (aggregates of anaerobic microorganisms), which rapidly break down organic matter into methane and CO₂. This innovative system, which also facilitates the reuse of methane produced for plant operation, is attracting considerable attention for its various performance features, which include superb efficiency and minimal space and energy requirements. The Kashima Plant expects the new system to reduce its annual emissions of CO₂ by 720 tons, as well as to significantly lower its operating costs. 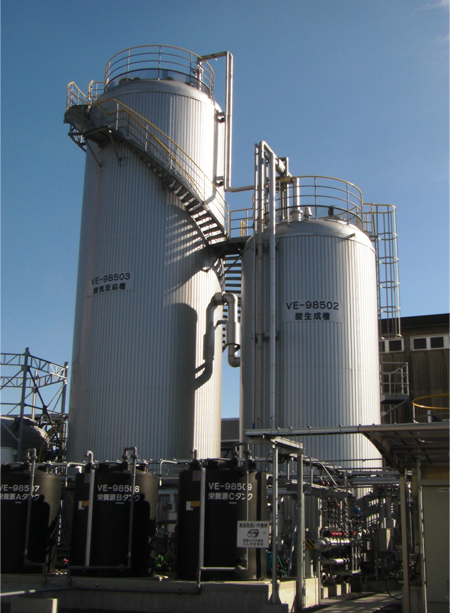 The PRC is reinforcing regulations pertaining to chemical substances with the aim of balancing economic growth and environmental protection. It is against that backdrop that 20 DIC Group companies in the PRC have promoted improvements in their own practices for handling chemical substances based on the Group’s environmental management system to reduce chemical substance emissions, water intake and discharge, waste disposal and energy consumption and have submitted data annually to the relevant authorities.